Lord Ganesha is considered as the Lord of prosperity, wisdom and good fortune.

Lord Ganesha represents the power of the Supreme Being that takes away obstacles and guarantee victory in human accomplishments.

By tradition, every religious festival begins with the worship of Lord Ganesha. The portrayal of Lord Ganesha is in such a way that He is a blend of human and animal parts. These illustrate some philosophical perception of deep spiritual importance which have great role in worshipping Lord Ganesha.

Ganesha’s powers have a very strong impact on our lives. A Ganesha idol is a remarkable and indispensable element of every Hindu home. It represents a human being having the entire Cosmos in himself, with a massive amount of spiritual energies and authority. We should imbibe all these values of the great elephant God in our day-to-day lives. Ganesha, with his mysterious powers, will make one prosper. He is a symbol of love and is everyone’s well-wisher.

Lord Shiva is the God of destruction and regeneration.

His duty is to destroy all the worlds at the end of creation and dissolve them into nothingness. The Shivaling is also symbolic of the Supreme Self. It is verily Maheswara Himself, the Highest Self and the Lord of the universe. In this aspect it has three parts. The lower part represents Brahma. The middle part, which is octagonal in shape, represents Vishnu. The upper part, which is cylindrical in shape, represents Rudra. It is also called Pujabhaga, since it receives the actual offerings of milk and other substances.

Lord Balaji is one of the most celebrated forms of Maha Vishnu during the age of Kali (the present times).

According to the Hindu scriptures, Vishnu, out of love towards his devotees, incarnated as Venkateswara and appeared for the salvation and upliftment of humanity in this Kali Yuga age. It is considered the supreme form of Vishnu in this age.

Venkateshwara has a dark complexion and four hands. In his two upper hands he holds a discus (a symbol of power) and a conchshell (a symbol of existence). With his lower hands extended downward he asks devotees to have faith and surrender to him for protection.

The nine planets are collectively known as Navagrahas. Below are navagrahas.

It is well known that these planets are very important, when it comes to the calculations made by Vedic Astrology. Several things related to one’s density are directly connected to these planets.

They are worshipped in Hinduism for good luck or to overcome adversity, bad luck or misfortune arising from past karmas or birth related defects (dhoshas).

It is believed that Lord Ayyappa has his divine control over Lord Shani. According to Hindu astrology, Shani or Saturn is one among the planets. People who believe in astrology and horoscope always think about that the position of Shani on their horoscope which they believe can cause misery to their life.

Lord Ayyappa (Dharma Shastha) is the union of the spiritual powers of Lord Vishnu (the Lord of the universe) and Lord Shiva (the supreme power). So with his great power Lord Ayyappa has got control over Lord Shani. He is also known by the name Shaneeshwaran Ayyappan.

The 18 holy steps and its significance:
The steps were originally made of granite but were said to have been damaged by pilgrims over a period of time due to constant wear and tear and breaking of coconuts. It is now said to be covered with Panchaloha or five metals (gold, silver, copper, iron and tin).

According to tradition, only those pilgrims who have undertaken the 41 day fast and carried the Irumudi on their heads are permitted to climb the steps. The number 18 is said to be a holy number as 1+8 equals 9 which symbolises the power of the spirit in most of the other religions and represents faithfulness, goodness, joy, universal love and spiritual enlightenment in Hinduism.

The first five steps are said to symbolise the five senses (sight, hearing, smell, taste and touch). The next eight steps signify the eight passions (Lust, anger, avarice, attraction, pride, jealousy, unhealthy competition, boastfulness). The next three steps signify the three Gunas namely Sattva, Rajas and Tamas and the last two steps signify Vidya and Avidya (Knowledge and Ignorance. The 18 steps also symbolise the 18 weapons that Lord Ayyappa surrendered before merging into the idol at the sanctum sanctorum.

The number eighteen can also be traced back to the Vedic age. Lord Brahma was said to be the instrument for the first Veda which has 18 chapters. It was later divided by Veda Vyasa to create the four Vedas, Rig, Yajur, Sama and Atharva. Each of these Vedas has 18 chapters. Ved Vyasa was also the writer of 18 Puranas and 18 Upa Puranas. The Mahabharata war at Kurukshetra was for 18 days and the Bhagavadgeeta has 18 chapters.

Sai Baba, one of the foremost sadgurus of India, lived in Shirdi for 60 years and elevated it to the status of a great spiritual center. Shirdi is located in the state of Maharashtra, India. He never preached, toured or discoursed. He shunned unnecessary publicity. Yet by the sheer brilliance of His spiritual fire he drew innumerable devotees to him from all over the country, irrespective of their caste or creed. He taught the unity of all religions and the universality of Spirit in all existence. His method of teaching was through direct experience.

Every Thursday, at 6:30pm, Baba’s pooja: beginning with Dhoop Aathi followed by Kshirabhishekam, Bhajans and Alankaram. Then, Sai Ashtotharam will be performed, and the pooja will be concluded by Shej Arthi and Mahaprasadam.

With all the devotees support, our future plans are to make Baba’s Mandir, a Meditation hall , once a month Sai Satcharita parayan and have Kakad and Madhyana Aarthi.

We will be welcoming the following vigrahams soon to Hanuman Temple.

Navagrahas or the nine planets have great significance in Hinduism.
They are influential in determining good & bad times in one’s life.
Deity Dimension : Surya graha - 16in.; other 8 grahas - 12in.

Well known as Kumaraswamy, he is considered the God of War as he was created
to destroy the demons representing the negative tendencies of human behavior.
Deity Dimension :2 feet height, panchaloha vigrahams with full kavacham & alankaram set. 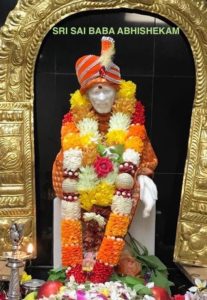 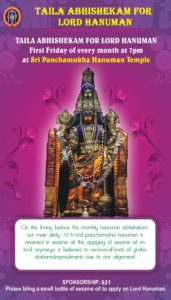 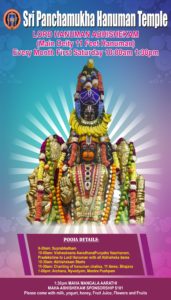 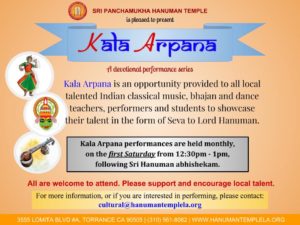 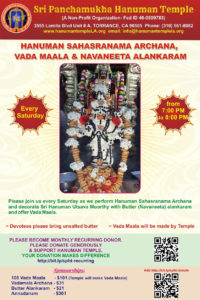 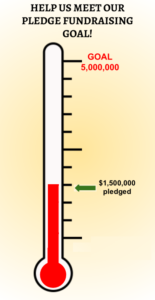 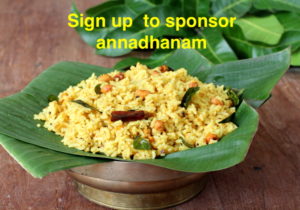 Show your support to the Temple by donating generously. 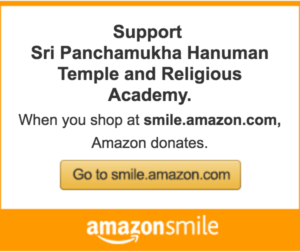